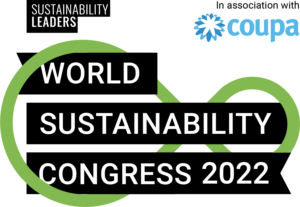 The countdown is on. The UN’s 2030 sustainable development goals are bold and without a clear strategy for success, businesses risk falling short.

The World Sustainability Congress 2022 will gather global organisations to map out how to reach the big climate goals of 2030, shining a light on the initiatives delivering impact now.

Join us for an immersive day of leadership workshops, spotlighted case studies and future-facing discussions.

Agenda at a glance

The direction of travel is clear. At COP26, governments pledged to achieve net zero by 2030 on more than 80% of the world’s emissions. How are you translating targets into action and accountability?
Solving for the right issues and formulating the right sustainability strategy​

Organisations must structure and prioritise their sustainability strategy according to the level of impact on the environment and society. Find out how leaders are not only setting targets, but also demonstrating concrete actions to reduce their footprint.

As investors increasingly demand insight into corporate ESG impacts, green finance is quickly becoming central to corporate sustainability planning. With the market continuing to expand, businesses must develop an understanding of its role in benefiting people and planet.

Learn how external sources of sustainable innovation can help you achieve ESG ambitions faster, including from suppliers, startups, and customers.

Upstream scope 3 emissions remain the largest source of most companies’ ESG footprint. Find out how your peers are acquiring accurate data on these emissions, as well as methods for working with suppliers to address their footprint.

COLLABORATIVE APPROACHES TO SOLVING FOR THE ESG AGENDA

82% of Chief Sustainability Officers highlight external collaboration as essential for their sustainability strategies. Hear how businesses are working hand-in-hand with suppliers, governments and social enterprises to address the root causes of their ESG footprint.

The direction of travel is clear. At COP26, governments pledged to achieve net zero by 2030 on more than 80% of the world’s emissions. How are you translating targets into action and accountability?

This is partly due to the lack of visibility companies have over these emissions. “For a long time, businesses have relied on spend data for scope 3 reporting,” said Kelley Hinds, Head of Risk & Sustainability at Roche, as she spoke at the first World Sustainability Congress earlier this week. “But it’s complicated to get to reality with that data because a lot of emission factors here are unscientific and sometimes even made up.”

Collecting more accurate data requires that companies work directly with suppliers. Roche, for example, is now working to get access to site-level emissions data from suppliers that covers as much as 43% of its scope 3 category 1 and 2 emissions.

But getting accurate CO2 emissions data also requires that buying organisations share information with one another. “Individual companies cannot do this alone,” noted Donna Wilczek, SVP Product Strategy and Innovation at Coupa. “We should not be competing to drive down emissions – we have to come together as a community.”

To that end, Coupa has developed a spend management technology platform that allows multiple companies to report the CO2 data they collect from working with suppliers. In this way, information can be aggregated and shared between companies, streamlining the data collection process and allowing businesses to more quickly commit to Scope 3 action.

This then raises the question of standardization. Efforts to address the carbon intensity of supply chains are undermined when done in isolation, as root problems will only be shifted elsewhere instead of eliminated altogether. “For that reason we can only move faster on Scope 3 with industry collaboration,” said Hervé Le Laou, Chief Procurement Officer at Heineken.

The speakers at the Congress outlined several ways in which this collaboration can happen, including aligning on requirements contained within supplier codes of conduct; using similar supplier contracts and invoices; and replicating sourcing processes across different organisations. The need for such collaboration is also being spurred on by a quickly changing regulatory environment. Legislation like the California Environmental Quality Act in the US or the EU Taxonomy in Europe are increasing the speed at which industries are working together. “And this is what ultimately drives standardization,” Hinds said.

One such collaboration currently ongoing at Roche is its partnership with a fellow chemical manufacturer to eliminate methane production in cattle. Not an area traditionally associated with a pharmaceutical company like Roche, it is nevertheless one where the company’s spend power can influence Scope 3 emissions. “So we do tie into other industries where we can have a positive carbon impact”, Hinds explained. “We must target areas such as this that can make a difference, rather than just focusing on our own reporting.”

Projects such as this inevitably require investment – and this is changing job roles within each company that took part in the Congress. “The first thing is to have dedicated resources that are separate from commercial teams and can focus only on carbon reduction roadmaps,” said Le Faou, who explained that this removes any conflict of interest that team members with conflicting KPIs might otherwise have.

The business case for making investments such as this can be difficult for many businesses. Despite the increasing regulatory pressure outlined above, organisations on average are not set to increase their sustainability budgets next year, according to Sustainability Leaders research. The way Le Faou views such budgetary constraints is simple. “The cost of inaction tomorrow will be higher than action today”, he says. “Not only from an environmental point of view, but from a financial one. And that’s important for all companies to understand – you must invest now to future-proof your business.”

Register your interest for the World Sustainability Congress 2022.